Epilogue: A Bear (Mountain) of a Century

While my trip last week was invigorating, the combination of the uncompleted century day and the rain cutting it short left me feeling a bit incomplete. I still had plenty of gas in the tank and craved that larger sense of accomplishment. Sooooo…

Yesterday I took advantage of good weather and the full cycle of sun in the last days of summer to attempt a century ride to Bear Mountain and back. This ride from my home along the Hudson River would be round trip over 100 miles and include over 4000 feet of altitude for climbing.

I know for those of you who do Ironman, this is just another day at the office, but for most of us this is a big ride.

I took the same Mikkelson bike from the DC trip only now it was stripped of all the overnight gear. At 22 pounds it was super light and on a test ride Friday I felt like I was flying without all the gear.

My last century (Waves to Wine) I did was near the turn of the century when in my 30s, so I was hoping my body would take the punishment.

Saturday night Van readied me by making her own sourdough pasta so I could carb up for the ride. I made the spicy veal meatballs: 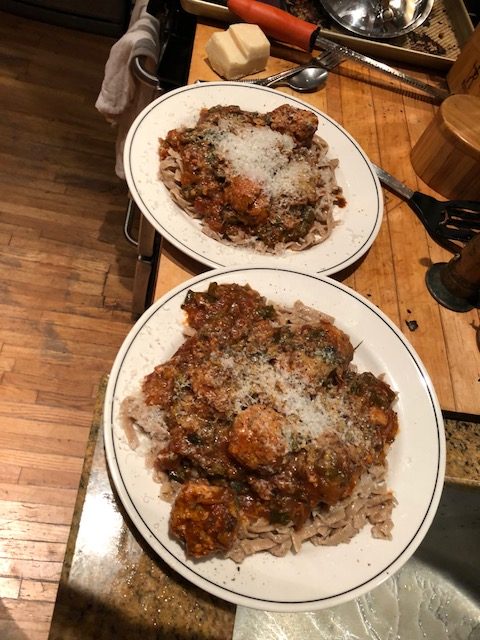 I left 72nd St. at 7:45 AM Jacked up on pasta leftovers, plum crostana and plenty of coffee. The weather was about 80 degrees all day and sunny. I turned on my NYC 84 song playlist on Spotify (lots of Billy Joel, Sinatra, and Duke Ellington) and set off. 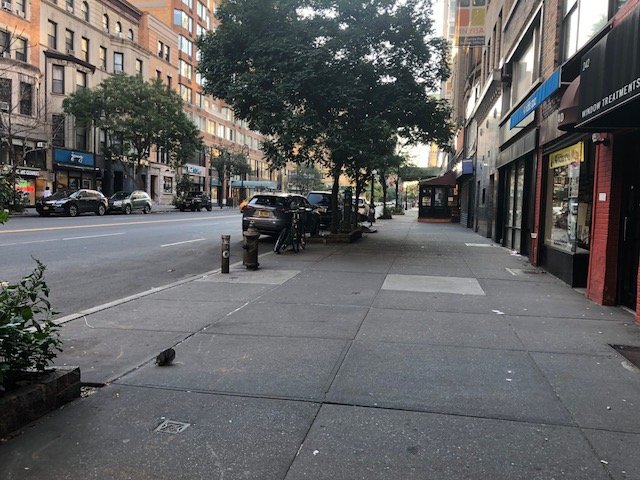 The first milestone was to cross the George Washington Bridge. Narrow lanes… 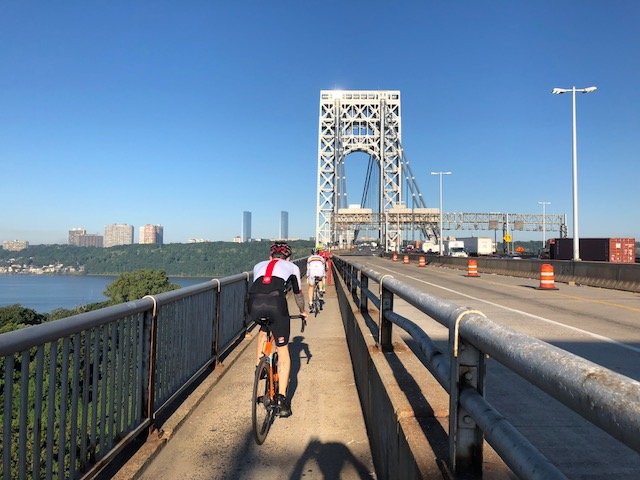 …but fabulous views of the city. Once across I headed north on 9W through a part of New Jersey. 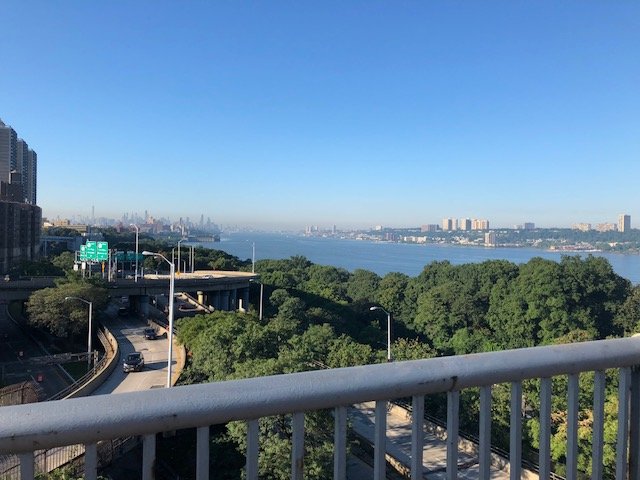 I had heard that 9W could be very crowded with both cars and cyclists, especially on Sundays. I soon found out that both were true. In fact I quickly saw all the serious NY/NJ area cyclists. It was a constant show of Colnagos, Pinnarellos, and of course plenty of triathlon folk on Cervelos. (Not one Pegoretti.) Of course I saw most of these from behind as they passed me. Many were sprinting to Nyack. I carried zero pride and need to race as I was in for the long hall. Comfortable humility was the order of the day.

The traffic on 9W was indeed heavy as reported, and I don’t want to say that New Jersey was tough on cyclists but this downed sign at the outset sort of said it all. 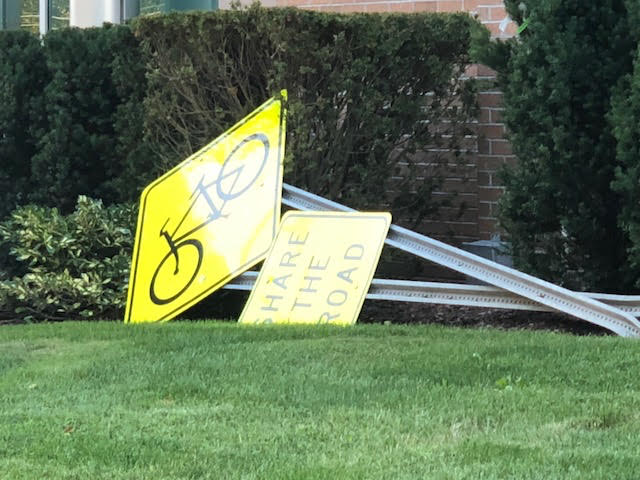 Luckily I was back in New York State before long. I crossed the state line just as Frank was belting out New York, New York!

At 22 miles I was ready for more caffeine and easily found in Rockland one of the many coffee places that catered to cyclists. It made for a good first stop. 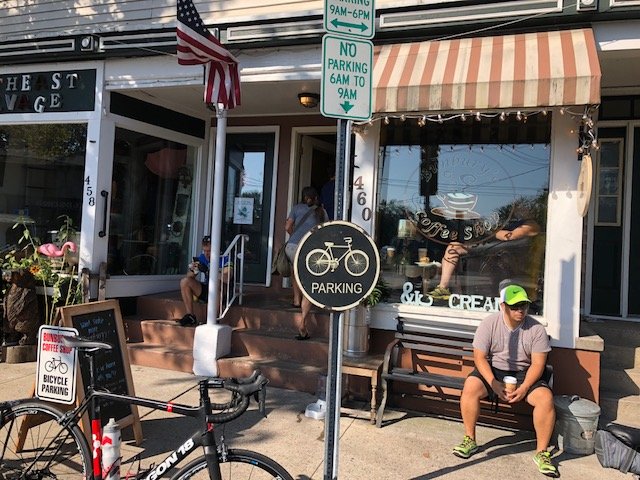 After gawking at the amazing waterfront estates in Nyack, Google maps treated me to an 8 mile alternative to 9W. It was a scenic dirt and gravel path along the water. The Gator tires did well. This gave me a good idea of what to expect when I prep for L’Eroica next year. 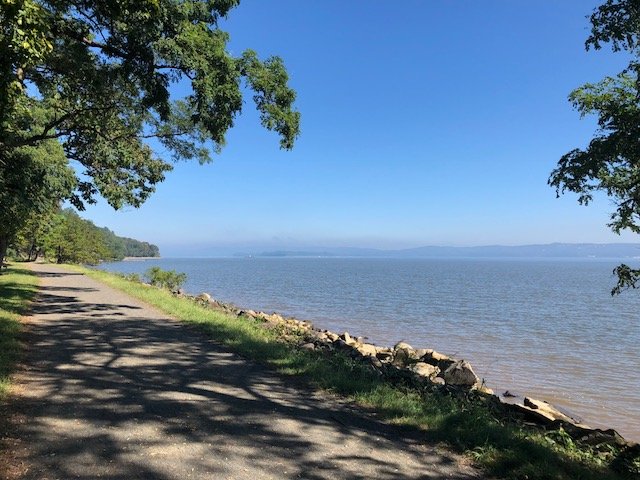 The Bear Mountain peak back and forth is actually slightly less than 100 miles so I knew I would need to add a few miles somewhere. This is the Bear Mountain Bridge nearby. Before heading up the mountain, I went across the Hudson… 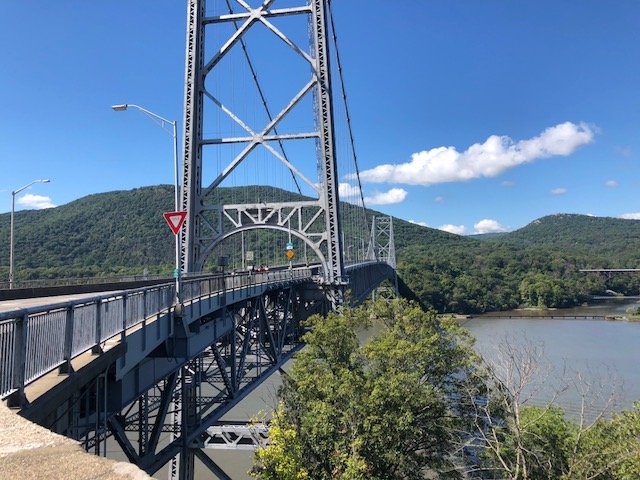 …and then returned catching this wonderful view of the Northern Hudson valley. 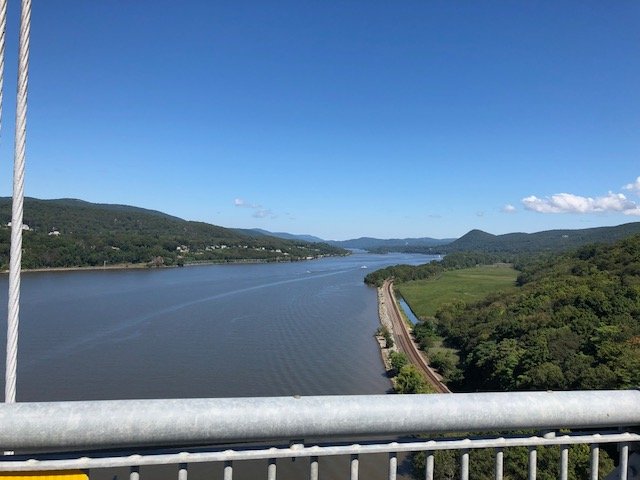 After a 5 mile and 45 minute strenuous climb up Bear Mountain, I reached the summit and got an even better view. 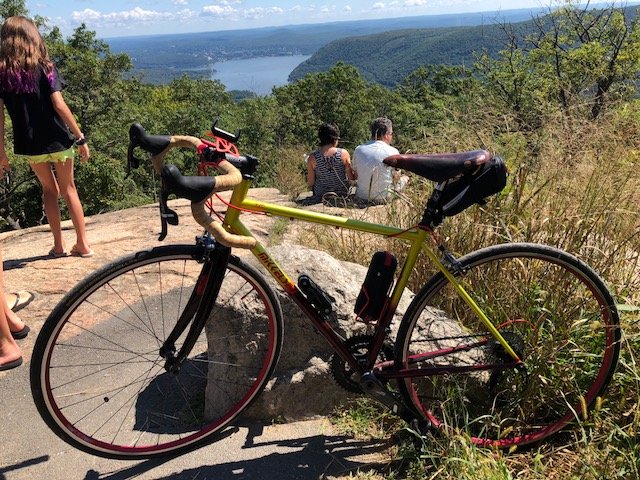 I was half way done. Now all I had to do was head home. 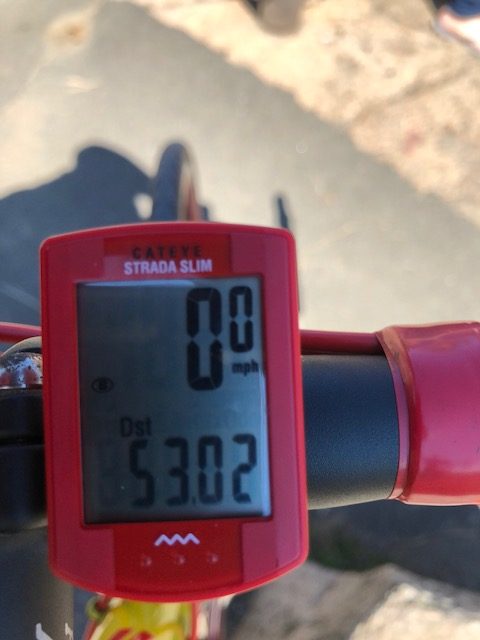 It was about 1:00pm. Plenty of time before dark and MOSTLY downhill. I felt pretty good. 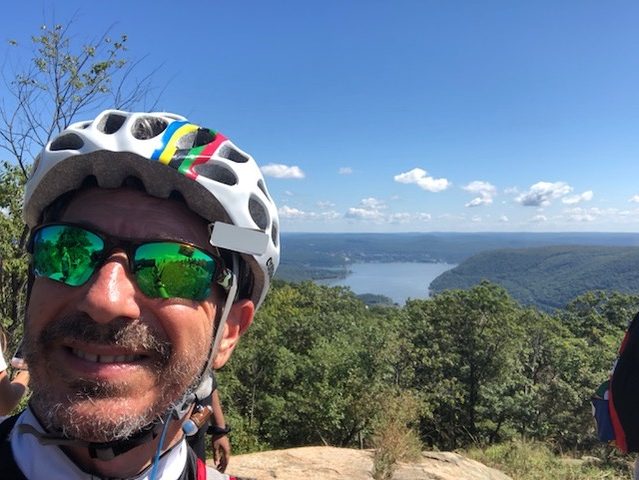 By mile 65 I was pretty hungry. I looked for burgers but they were tough to find. I did however discover several authentic Mexican restaurants in Havershaw at mile 69. The owner was nice enough to let me bring in my bike, so I fueled up on a burrito with Pastor and Lingua accompanied by rice, beans, and a much needed sugar-packed soda. I filled my camelbak with ice and was on my way. 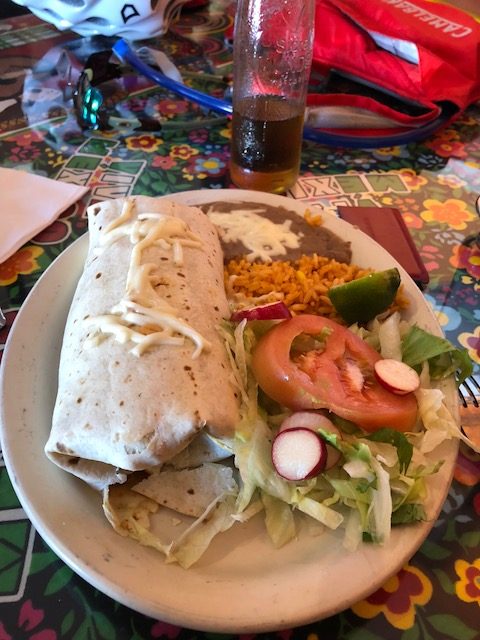 At mile 70 I encountered my only true problem… THIGH CRAMP!!!! It took me 15 minutes to stop, drink plenty of water for hydration, gobble dried bananas for potassium and massage out the cramp. It never fully left but as long as I had resistance in my pedaling it settled out. When the spinning was easy it would remind me it was there.

At mile 83 I stopped once more at the Rockland Coffee place. This time for a jolt of caffeine and sugar with a decent size Mocha. There were a couple of big hills still to go which I knew from the journey up. I would need the extra boost to climb them at the end of the trip.

Finally I got back to the George Washington bridge. The City beckoned me by playing Billy Joel’s New York State of Mind as I crossed. 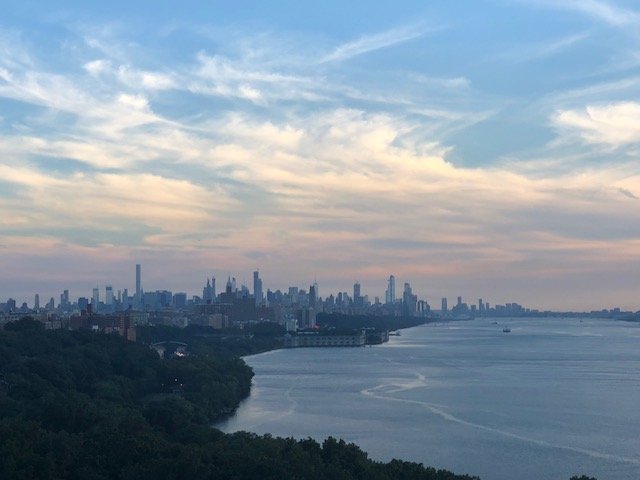 The last 10 miles of the Century is truly the easiest part. Sure you are tired and weary but you know the end is close. I crossed mile 100 just in time to catch a lovely sunset on the Hudson. 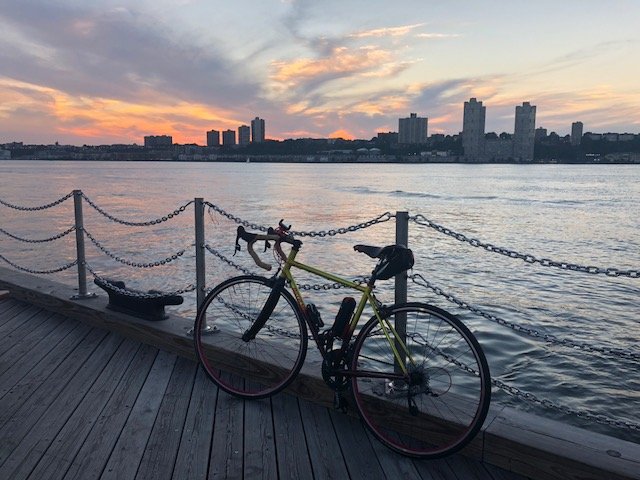 With one final view back of my day’s journey, I pedaled the last few miles for home. 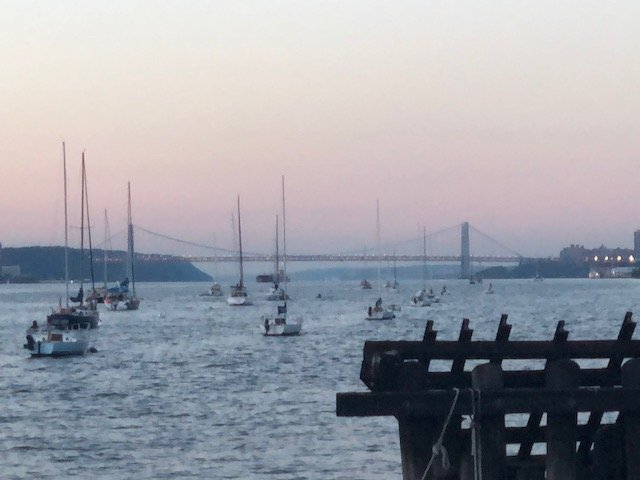 I lived!!! I got home at 7:30PM. Van swears I am thinner than when I left. The scale actually showed a 4 pound drop from the morning. 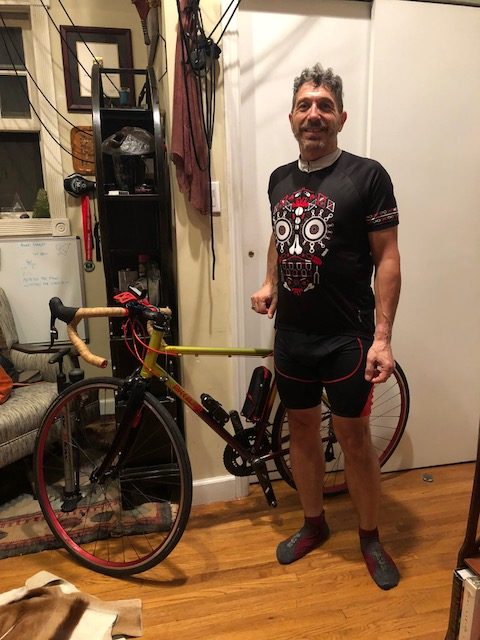 The odometer told the story. It was my largest 1 day ride ever (for now). A complete validation after the NYC-DC trip. I had left it all out there and felt great! 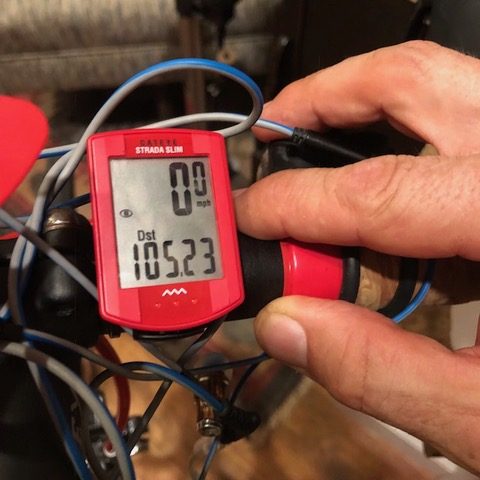 Final thoughts:
Truly this was one of the most beautiful rides I had ever taken. I am sure it would be even prettier when the leaves are changing. The climbing is sufficient to even challenge some California riders. It’s a great ride that can also be done one way or in parts.

I welcome anyone who is in NYC and wants to come ride this with me either in part or all, I have an extra bike and we can see some great scenery. It’s a good chance for some of you who enjoy your spinning classes to get some fresh air and nature. (You know who you are.)

On to Birmingham in December! 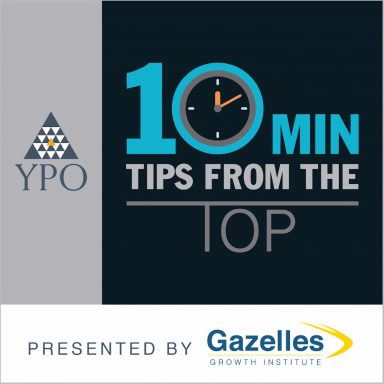